Day 12 of our trip to Honshu. We disembarked the bullet train late morning and made our way to the most conveniently-located of all our accommodation on the trip: Hotel Granvia, a soulless glass edifice attached to the Shinkansen Line at Hiroshima’s central station. We had (rightly, it turned out) prioritised ease and accessibility over interest, given it was only a two-night stay. It was also, I have to admit, quite nice to have the option of a “Western style” breakfast for a change. As much as I was loving rice porridge, mackerel, rose-hip jelly, onsen tamasgo and other delights, I’d started to crave a bacon butty.

Dropping our bags at reception, we made our way effortlessly to the Peace Memorial Park via the city’s efficient tram and train network. So far, so good. But there endeth our insouciance. I’m not going to sugar-coat this: it was a tough afternoon. As soon as you see the carcass of the A-Bomb Dome, a quiet, persistent forlornness descends and refuses to be shaken. Even on the sunniest of days. I walked through that park with legs of lead, taking in the dreadful certainty and enormity of man’s propensity for evil.

The museum, though excellent, is overwhelming and too much to fully take in on one visit. And in the cavernous, subterranean Peace Hall, I allowed tears to come, given words would not. Only the crowds of children handing out small origami cranes allowed, finally, a sense of lightness to return. Although their poems and songs, recited at the Children’s Memorial at the direction of their teacher, left me choked up again. It’s a strange irony that the atomic bomb was nicknamed Little Boy, given the thousands of infants who died, either at the time or from leukaemia in the aftermath. The Memorial is a fitting dedication to the young victims of the atrocity, adorned with hundreds of brightly coloured and patterned cranes.

I was pretty ignorant of the significance of the crane before our visit. The Japanese refer to it as the “bird of happiness”; with its wings believed to carry souls to paradise. Traditionally, it was believed that if one folded a thousand origami cranes, your wish would come true. Sadako Sasaki – a young girl who died from radiation-induced cancer ten years after the bomb – famously set about making a thousand cranes from her hospital bed using medicine wrappings, the paper from other patients’ get-well presents, and anything else she could scrounge together. Accounts differ as to whether she completed the task or whether her school friends finished for her, posthumously. But the story has become a symbol of hope and healing during challenging times.

A bath and nap were needed next, before a calming drink on the 22nd floor of the hotel. It was only then that I felt able to discuss what we’d seen and how it had made me feel. I’m not naïve enough to have expected to be unaffected by the experience, but I hadn’t appreciated just how much of a gut punch it would be. Luckily, I had Paul to help me shake off the day and ground myself back in the present. Helped enormously by a fantastic barbecue fish meal and delicious range of sakes at Guttsurian near the port, later that evening.

Our second day was spent on Miyajima Island, part of the Setonaikai National Park, just a short ferry trip from the city. This is where you find the Giant “Floating” Torii Gate, which adorns many a postcard. Arriving at low tide, we were able to walk on the beach up to, and under, the colossal structure. Mightily impressive. But much more of a sight to behold in the evening, partially submerged by the sea. More on that later!

There’s so much more to Miyajima than the Gate, however, and if you fail to go up Mount Misen then you’re really missing out. Our trip up the mountain started at Daishō-in Temple in the foothills, where you are directed to climb the pagoda and pray at the shrine for an end to nuclear armament. As well as the usual halls and statues, the beautiful temple complex includes a cave filled with 88 icons representing the temples of the Shikoku Pilgrimage (on Japan’s fourth largest island). Another unusual feature is the row of spinning metal wheels inscribed with sutra (Buddhist scriptures) that line the stairs of the temple. Guests are encouraged to turn the inscriptions as they walk up, which – it is said – has the same effect as reading them. So, without any knowledge of Japanese, you can benefit from the blessings that the reading of sutra is believed to bestow. 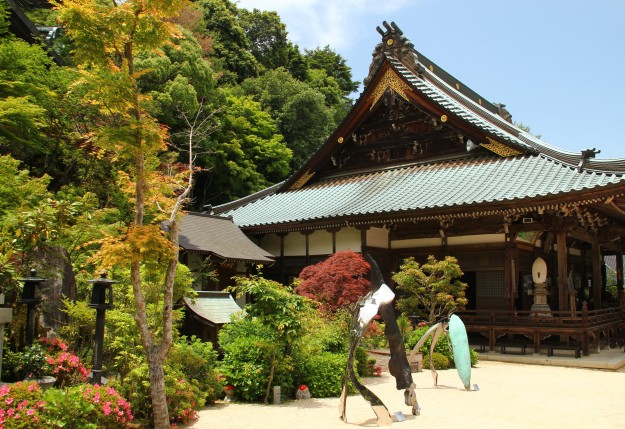 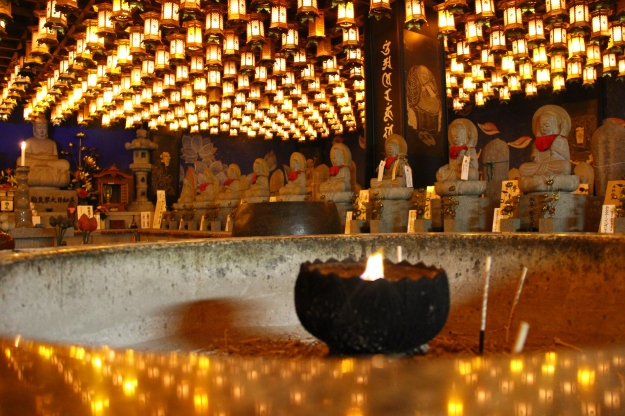 Having stopped to buy an antique sake jug from a market stall, and a freshly-baked Momiji (a maple-leaf shaped sweet bean cake, popular on the island), we next continued up through Momijidani Park to the cable car station. The journey up the mountain proceeds in two stages, with the second cable ride really quite high (and not a little hairy). Disembarking at Shishi-iwa, we continued on foot to the summit. I’m struggling to recall now, but I think it was about a 20-30 minute walk. En route, we stopped at Reikado to see the “eternal flame” – disappointingly not the one made famous by The Bangles, but one supposedly ignited by Kobo Dashi over a millennia ago. It was from this original flame that the one in the Peace Park was set ablaze. For more on the legend of Kobo Dashi, see my separate blog post Monks, Spirits & Fire. 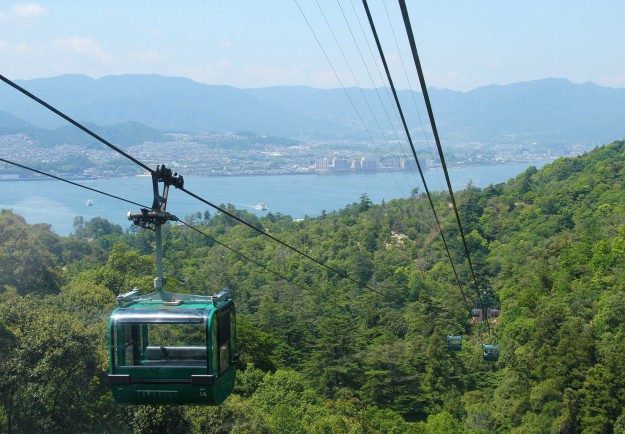 Atop the Observation Deck at last, we marvelled at the stunning views from Misen’s peak…and took many a panoramic photo of the shewn boulders, tree canopy and surrounding islands. With the sun beating down, I distinctly remember scanning my surrounds and thinking what a lucky bugger I was!

Rather than return by aerial tramway, we walked back via the Daisho route. There are about three or four different trails you can choose from for your descent – I can’t comment on the others, but Daisho was very pleasant. Mostly shaded woodland, the path also meanders past a lovely waterfall. About an hour into the otherwise solitary ~1.25hr stroll, we passed a succession of hardy souls making the ascent, each one asking (with hopeful anticipation) if they were nearly at the top. Struggling to hide their disappointment on learning they were far from the half-way mark, one (I would say rather sensible) woman glowered at her boyfriend and turned on her heel, heading in the direction of the cable car. On a hot day, I would definitely advise doing it our way around.

Back at the base, we treated ourselves to a purple sweet potato ice-cream (nicer than it sounds) and a beer (or shochu cooler, in my case) from the local brewery, before visiting Itsukushima Shrine on the water’s edge. By now close to high tide, we navigated the creaking wooden walkways teetering on stilts, admiring the gorgeous views out to sea. Consisting of a main hall, prayer building and noh theatre stage (on which people gather at dusk to watch music, dance and dramatic performances), Itsukushima has been a holy site since the 12th century. Compared to many of the other temples and shrines, there’s not too much of interest to explore here. But the wow factor follows sunset.

After sating ourselves with a delicious soba okonomiyaki, we returned to see the shrine and “floating” torii illuminated and dozens of lanterns springing alight. Dangling our feet over the pier, we watched the sun slowly dip beyond the horizon and the scene gradually become more and more magical. Free-roaming sika deer meandered across the beach, stopping occasionally to steal a guidebook or nibble crackers; and I sighed deep contentment. A wonderful (near) end to our holiday. 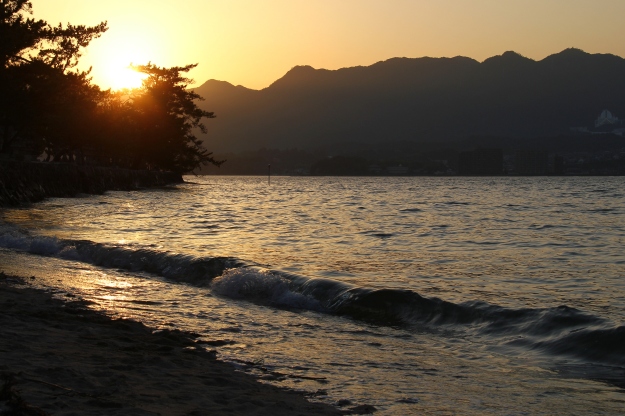 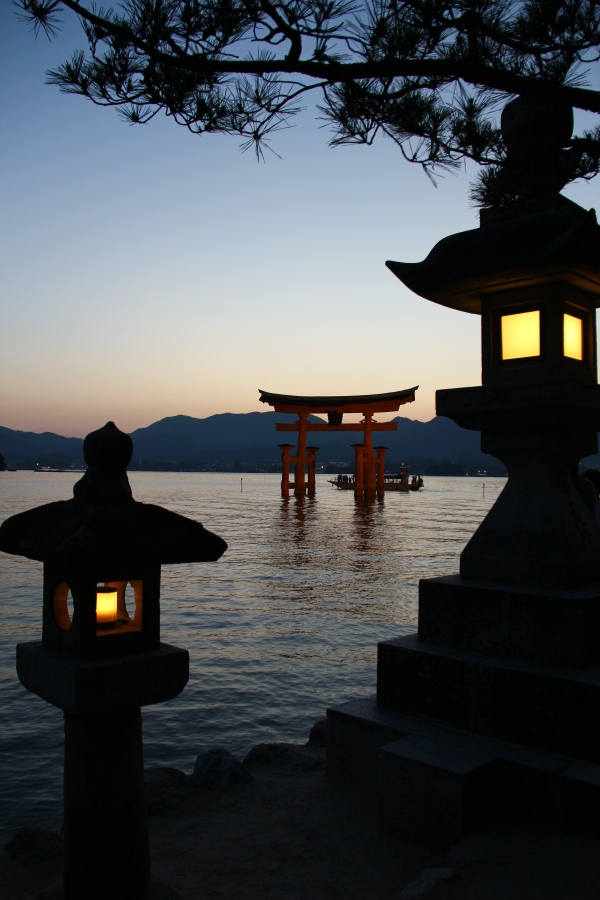 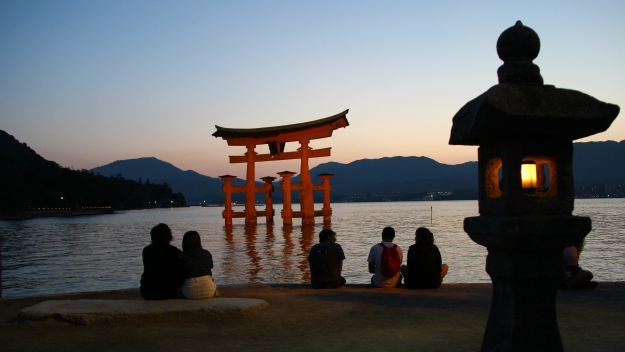