It feels much longer ago than it actually was, but back in September we had a really lovely weekend in València with my mother(s)-in-law Judy and Alison, brother-in-law Chris and his partner Ching. I’d never been before, and now it’s leapfrogged up my list of Spanish cities. The home of paella boasts great architecture, a long stretch of beachfront, vibrant markets, interesting galleries, great bars, and – importantly – fabulous street art.

The weekend started with a long stroll along Jardines del Túria, created when the city wisely decided to divert the Túria river following a catastrophic flood in the 1950s. The 350,000 square metres of dry riverbed have been cleared and landscaped, filled now with pretty gardens, fountains and ponds, around which people laze post-work or whizz around on roller-blades and bikes. The area also hosts Ciutat de les Arts y les Ciències, an arts and science park filled with Santiago Calatrava’s exciting modern architecture: the Oceanogràfic (aquarium), Hemisfèric (planetarium), and Palau de las Artes Reina Sofia (opera house and auditorium), amongst others. 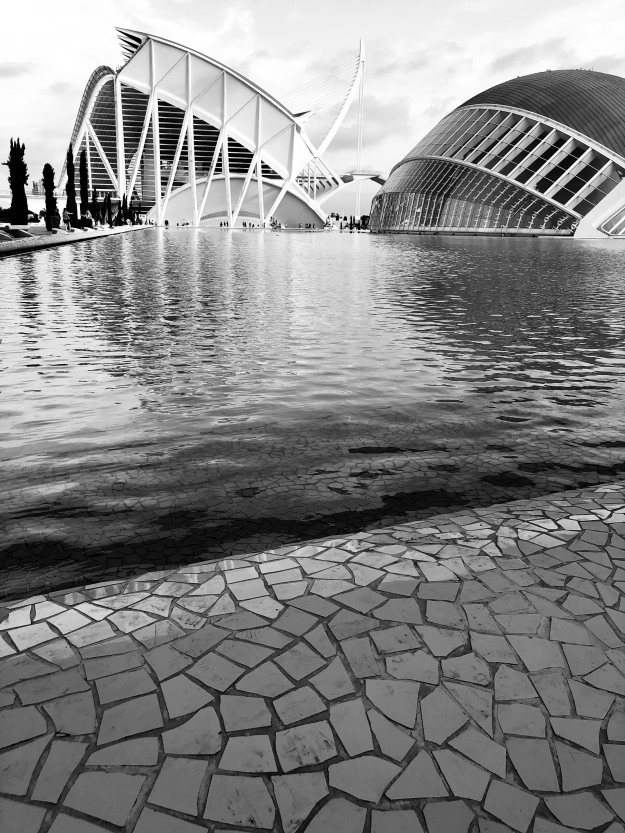 Food-wise, we enjoyed traditional rabbit and seafood paellas at Restaurante Levante, the socarrat crunch at the bottom of the pan particularly good. And some decent tapas at Taberna La Sénia. But it was my discovery of vermouth that was the real game-changer. For those unfamiliar, it’s a fortified wine flavoured with botanicals…and it’s delicious. It’s since become my favourite go-to apéritif.

Our Air BnB – a great apartment on Carrer de Correus – was a stone’s throw from the central municipal square of Plaza del Ayuntamiento. So the next morning saw us exploring the civic buildings, town hall and central post office, with it’s ornate elliptical glass dome. Before heading over to La Lonja, the Gothic silk exchange. Now a UNESCO World Heritage site, it’s worth popping in here to see the beautiful twisted-columned main hall and citrus-tree filled central courtyard.

The modernista marvel of Mercado Central was our next stop. Inaugurated by King Alfonso XIII in 1928, the covered market has a surface area of over 8,000 square meters, filled with drying hams, fresh fish, churros and coffee stalls, and colourful delis bursting with olives, artichokes and other delights. We ate at Bar Central: mixed reviews, given a lot of the menu items had run out by the time Paul and I made it to the front of the queue. Our companions, however, enjoyed beef cheek, cockles, veal, boquerones and great red prawns. You win some, you lose some. 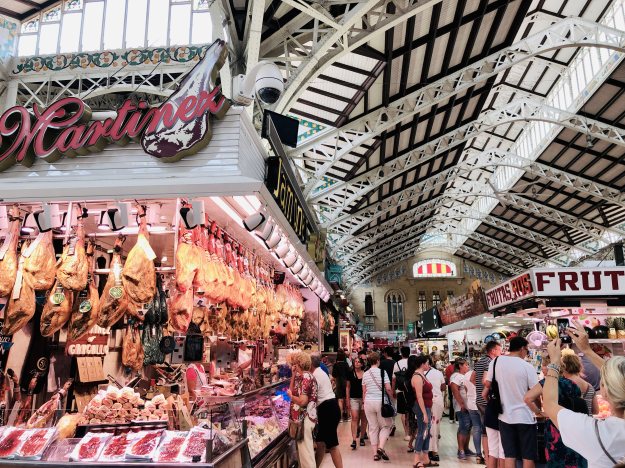 Next stop: La Cathedral. Make sure to pick up an audio guide for greater appreciation of the frescoes, chapels, reliquaries and artwork. The impressive central dome has a particularly incredible fresco – only relatively recently discovered – of an angelic host against a blue starry night. Built over a mosque, which itself was built over a Visigoth church, the cathedral’s pièce de résistance is Capilla del Santo Caliz (the Chapel of the Holy Grail). Yes, the Holy Grail. The cup of a carpenter. Of course, a quick google search reveals dozens of other contenders for the final resting place of Christ’s chalice. But the chapel is stunning and you can willingly suspend disbelief for a few moments. 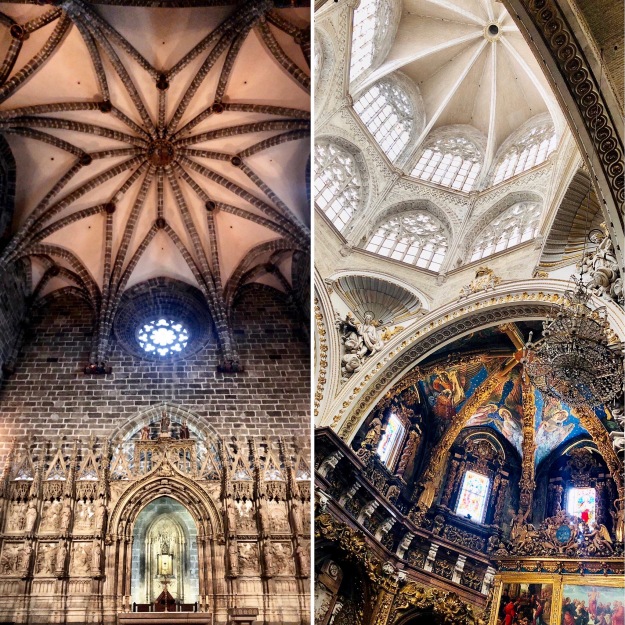 Before leaving the cathedral, it’s worth climbing the 200+ spiral stairs of El Miguelete bell tower for views down into Plaza de la Virgen, the once Roman forum, and out across the whole city.

By now, we were in need of a pit-stop. So, after a quick bit of shopping, we located a traditional-looking Horchatería. Horchata is a kind of thin milkshake made from pressed chufas (tiger nuts) – not to everyone’s taste, but I really enjoyed mine. 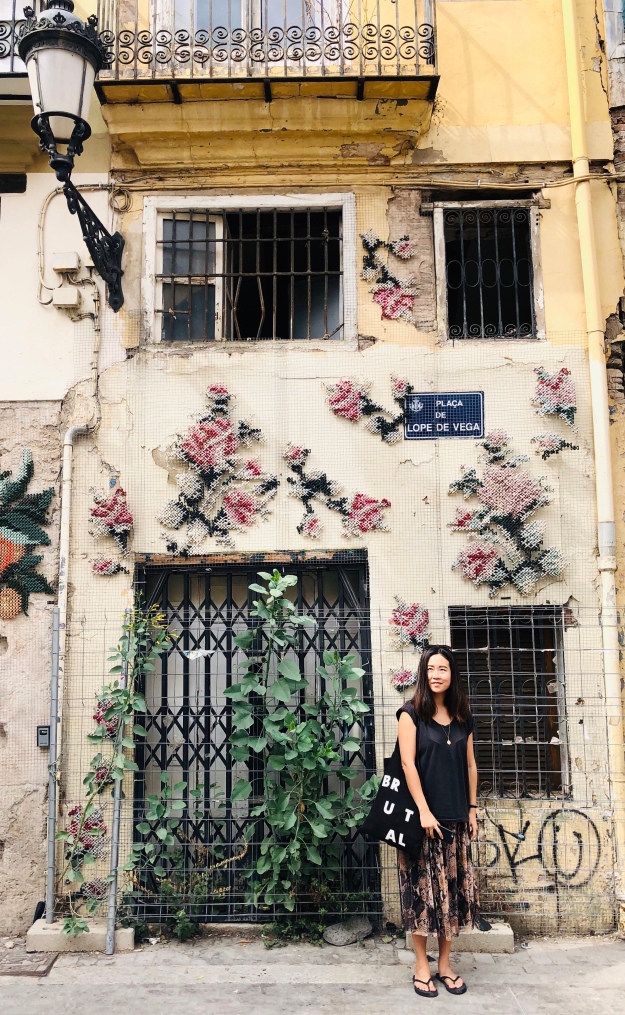 Our evening was spent in Bar Almudín, a cosy wine bar on Carrer de l’Almodí, and a great restaurant called Entrevins on Calle de la Paz. My octopus and rabbit leg were both delicious. A great place to celebrate Alison’s 50th birthday.

Day 3 was a busy one. Starting with churros and chocolate from a little cafe near the market, we headed first to the 16th century Renaissance seminary-come-gallery Museo del Patriarca. It houses manuscripts by Thomas More, as well as paintings by El Greco and Caravaggio.

A short walk away is the ostentatious Museo Nacional de Cerámica, with its highly-decorated facade and history of ceramics from the baroque period to modern day. I preferred the modern stuff, which included a collection of Picasso’s plates. Hailing a taxi, we next headed for lunch at Panorama, located on the pier overlooking Playa de la Arenas and the palm-fringed Paseo Marítimo promenade. The beachfront is about 3km from the city centre, and well worth the short ride.

After a few glasses of wine in the sun, some lobster ravioli and a tasty “deconstructed” ham and cheese croquette (presented, intriguingly, in a martini glass), we began a self-organised tour of El Cabanyal, the maritime barrio found behind the heritage port area (click on the link to see my separate photo blog).  The area is full of pretty tiled fisherman’s houses along narrow lanes. I loved it, not least because of the great street art. We walked from Museo de Arroz to Mercado Municipal de Cabañal, calling into Bodega Casa Montaña on the way for a sherry and nibble of ham. The bar is an institution, lined with barrels of sherry and vermouth and old fiesta and bull-fighting posters.

Back in the centre of town, I spent a bit of time shopping around L’Eixample and replaced some of my stolen jewellery (we were burgled not long after our honeymoon, unfortunately) from the little craft stalls in Mercado de Colón, another colourfully-tiled modernist edifice. A thoroughly enjoyable day! 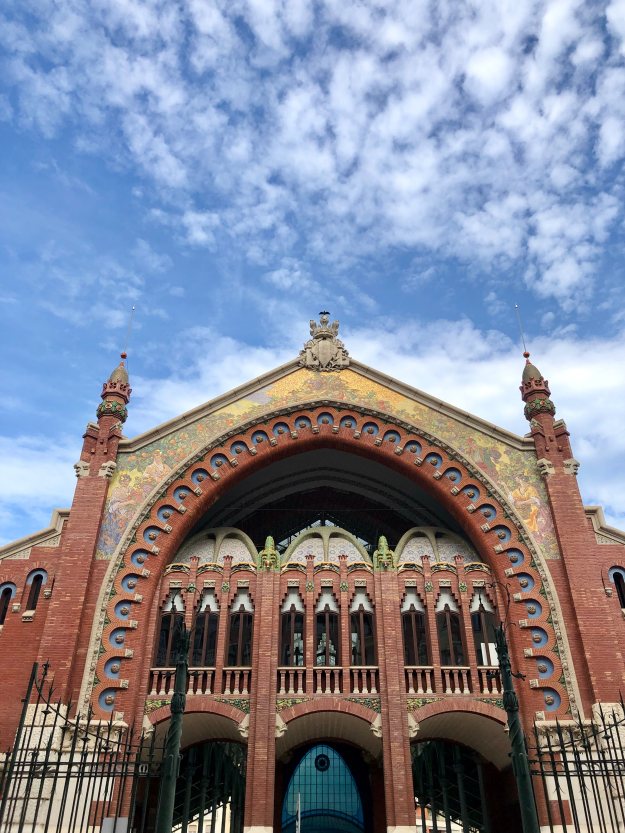 Our final morning in the city was spent exploring Barrio del Carmen. The “bohemian” area north of the cathedral is simply fantastic. If you’d thought El Cabanyal was a haven for street art enthusiasts…well, you ain’t seen nothing yet. The barrio is absolutely chock-full of amazing murals, graffiti and street art. I was like a child in a sweet shop. Links to separate photo blogs of the area’s highlights will follow shortly. We started our walking tour at Torres de Serranos, one of the impressive 14th century stone gateways to the city, and winded our way up, down and around the crumbling urban museum until we arrived back at Mercado Central. Leave yourself a few hours to properly do the area justice.

And that was it. A quick jamón ibérico bocadito from Beher, and then it was time to head to the airport. I can’t imagine we won’t be back at some point though. A great place for a long weekend break.