Returning to my archive to cover some trips that have been callously omitted. First off: the Hungarian capital, Budapest. Which I visited in 2012 with my dad. Remember 2012? When the world seemed bright and full of promise. London hosted the Olympics; the Mars Rover landed; the Queen celebrated her Diamond Jubilee; a human* broke the sound barrier; Obama was re-elected…. Of course, some crap things happened too, but – on balance – a pretty good year!

Anyhoo, late August 2012 saw us checking into a lovely hotel atop Castle Hill in historic Buda, on the west bank of the Danube. Now…I’ve discovered I can’t find my notebook from this holiday. So I won’t attempt to accurately recount the order in which we did things. And – possibly to most people’s relief – I can’t remember the names of any of the restaurants we frequented either. Although I do recall a very lovely goulash served in a hollowed out bread roll on the castle green. And the cake and pâtisseries from the famous New York Café on Erzsébet. The latter is lauded as one of – if not the – most elegant cafes in the world: a cavernous, ornate Italian renaissance building with stunning chandeliers, frescoes and marbled columns. A must, especially if you’re visiting the Jewish quarter in flatter Pest, a short walk across the Chain Bridge.

Sticking with that area, then, a visit to Dohány Synagogue is well worth it. It’s the largest in Europe, with a capacity of over 3,000. A beautiful Moorish Revival structure, it’s the centre of Neolog Judaism. Not far away, I’d also recommend the Iparművészeti Múzeum – the Museum of Applied Arts, a stunning Art Nouveau building with bright green tiled roof and an interior comprising Islamic, Mogul and Hindu design. It’s full of interesting furniture, textiles and glass-works. There were also various manuscripts on display when we visited. Hungarian is a Uralic language, one of only a few non Indo-European languages in the world, and in the same family as Finnish and Estonian. So it was interesting to learn a little more about it.

On one of our afternoons we also visited the City Park, packing our swimwear to spend a few hours at Széchenyi Baths. This is, I believe, the largest spa bath in Europe, with three large outdoor pools and numerous indoor medicinal baths. Built in 1913, the vivid-yellow Modern Renaissance building is fed by natural hot spring waters. In a city famed for its spas, dating back to the Roman settlers and expanded by the Turks in the 16-17th centuries, this is one of the most accessible and reasonably-priced spas, promoting a range of aqua therapies. It’s certainly a great way to chill out after a morning of heavy sight-seeing!

On another day we found ourselves on Margitsziget (Isla Margarita), a pedestrianised haven in the middle of the Danube. The 2.5km long island contains the ruins of a convent, lovely gardens, an octagonal water tower hosting temporary exhibitions and some beautiful – and refreshing – fountains. It was an incredibly hot day when we visited, and we needed frequent stops for ice-cold drinks, ice-creams and slushies. I think on the same day we’d climbed the dome at Szent István Bazilika, to take in the views across the city. So had arrived at the park already exhausted. Szent István (St. Stephen) was the first King of Hungary, and his “incorruptible” right hand can be found in the church’s reliquary. Our trip actually coincided with St. Stephen’s Day (20th August), a national holiday celebrating the foundation of the Hungarian state. The streets were decorated; we saw an aerial show over the impressive Parliament Building; there were various craft fairs; and a huge firework display in the evening.

The final two things I remember visiting in Pest were Hősök tere (Heroes’ Square) and Vajdahunyad Castle. The former is a large crescent plaza with statues of the seven chieftains of the Magyars (the settlers of Hungary) and a tall column atop which the Archangel Gabriel sits, holding the Hungarian holy crown. The latter is found on the edge of City Park and was built in the late 19th century as part of a Millennial Exhibition celebrating a thousand years since the Hungarian Conquest of the Carpathian Basin (i.e. the founding of Hungary). There’s a very pretty boating lake around the castle, and it’s particularly attractive at golden hour, just before the sunset.

Back over the bridge in Buda, there’s plenty more to explore. The ancient capital sits proud, looking down on the river and the modern city beyond. It’s Old Town streets are full of colourful houses, boutiques, cafés and little galleries. Uri utea (Gentleman’s Street) is a particularly nice thoroughfare, but it’s worth a longer wander around the cobblestoned area. As well as strolling the Várkerület District, home of Buda Castle.

The castle was first built in the 13th century to provide protection from the Mongols. Today’s 18th century incarnation is a Baroque Palace complex, containing the National Library, Hungarian National Galley and Budapest History Museum. The whole area is now a UNESCO World Heritage Site. My favourite part of the Palace was the enormous Mátyás kútja (Matthias Fountain), outside of which we caught the end of a classical concert on an evening stroll.

The wider Buda area also boasts Mátyás-templom, an 11th century church that’s considered one of the most unique on the continent. A mixture of Neo-Gothic architecture with a healthy dose of Romanticism and Orientalism thrown in, the building was host to the coronations of Hungarian Kings for centuries. During it’s varied history, it was used as a mosque for 150 years by the Ottoman Turks, and later owned by Jesuits, Franciscans and Catholics. Stunning both in daytime and illuminated at night.

There are a couple of important statues nearby. Holy Trinity commemorates the people of Buda who died from two outbreaks of the Black Plague, which swept Europe in the late 17th and early 18th centuries. The statue itself was meant to protect the city, following the first outbreak, but when the pestilence returned they built it bigger in order to make doubly-certain next time. There’s a also a huge bronze statue of Szent István riding his horse. 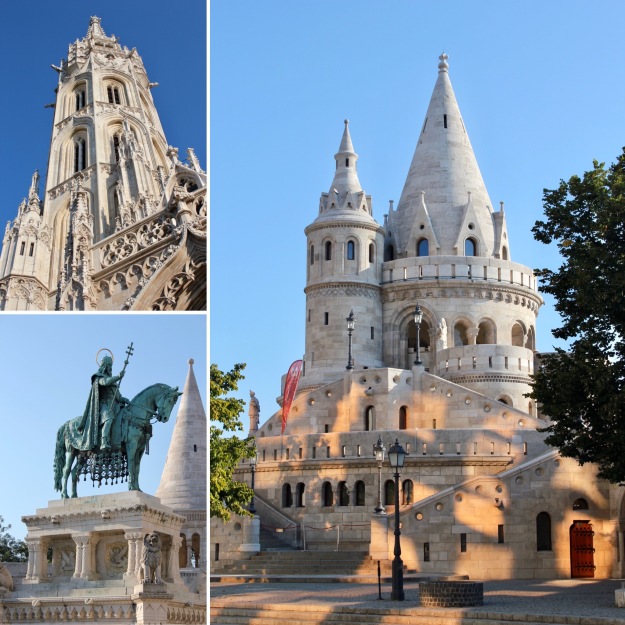 The latter is located within the absolutely glorious Halászbástya (the Fisherman’s Bastion). So named because the stretch of castle wall on which it’s built was said to be protected by the Guild of Fisherman in the middle ages. By far my favourite spot in the city: the Neo-Romanesque fairy-tale castle has multiple white turrets, arches and lookout terraces with panoramic views over the River Danube and across to the Parliament Building. It was from here that we watched the fireworks and I could have happily wiled away the hot afternoons reading on the Bastion’s walls.

Oooh, I just remember we also went on a boat trip down the river. Not sure how this fit into the schedule, but there you go. Basically, I’d heartily recommend a long weekend in this handsome city!

*I remembered (i.e. googled) that this was Felix Baumgartner. FYI. 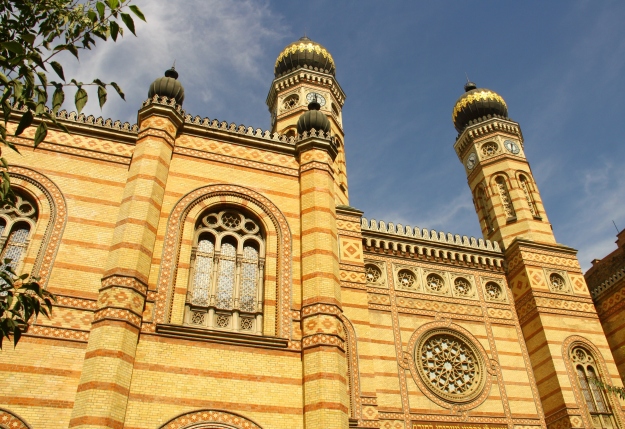 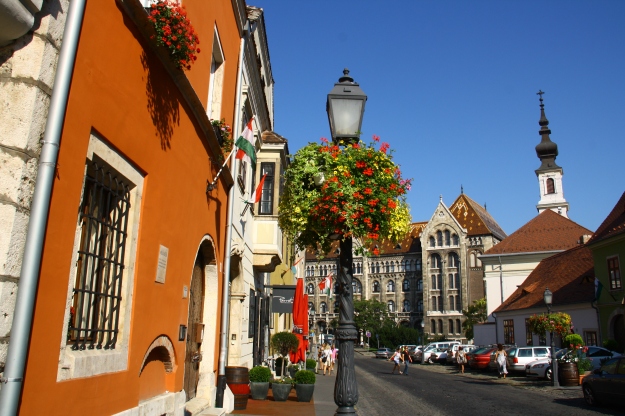 1 thought on “Pest and Buda”