Once the capital of Japan, Nara is home to a collection of important temples, the most significant of which are conveniently located in a large park at the foot of Mount Wakakusa. Arriving late morning on another day trip from Kyoto, we headed straight from the train station to the park on a mission to get to Kōfuku-ji pagoda before the crowds…and were immediately distracted by (i) perfect-looking nigiri (a handy late breakfast snack) and (ii) free roaming deer criss-crossing our path at every turn. The sika deer in Nara are very tame, almost domesticated, and have no qualms about stealing rice crackers – or indeed guidebooks, sunglasses, wallets (pretty much anything) – from tourists. 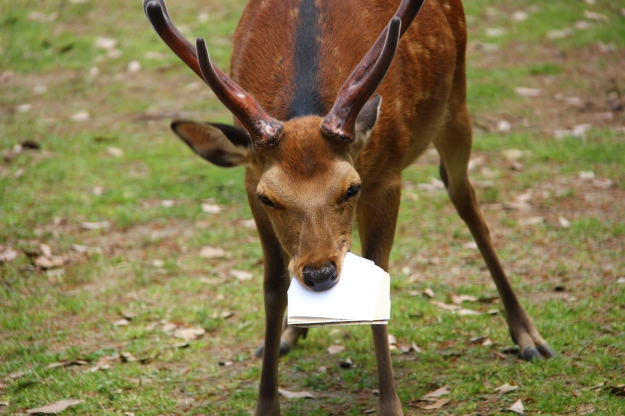 In the Shinto religion, deer are considered messengers of the gods. So it was right to pay them due respect. And pose for selfies.

Once we’d extricated ourselves and refocused on our goal, we found and enjoyed looking around the pagoda, Golden Hall and treasures of the Kōfuku-ji complex. The temple has been fully dismantled and relocated numerous times, and is now the national headquarters of the Hossō school of Buddhism. A good start to the day. Walking down through the park to the lake afterwards, we were lucky enough to catch sight of a Japanese couple having their wedding photos taken on floating Ukimido Gazebo. One of two sets of newlyweds we bumped into that day (the others a younger, hipster couple who preferred posing in a green phone booth – see my photos at Nihon no seikatsu).

Re-joining the throngs of tourists, after our respite by the turtle pond, we followed the trail of sturdy stone lanterns up through the forest to Kasuga-tiasha shrine. Built in the 8th century, this grand shrine of the Fujiwara family is famous for its 3,000 hanging bronze lanterns. Donated by worshippers, these can be found throughout the grounds and around the four alters dedicated to the deities of wisdom, nation-building, fortune-telling and thunder. The stunning building was one of my favourites of the holiday: all bright vermilion and gold, with twisting, peaceful paths around the trees…and baby deer tripping you up at every opportunity. 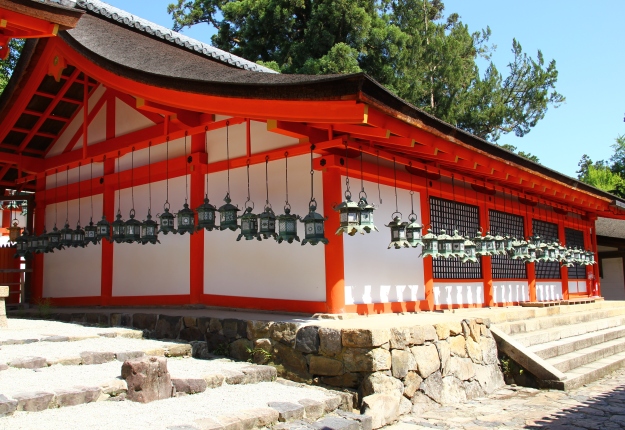 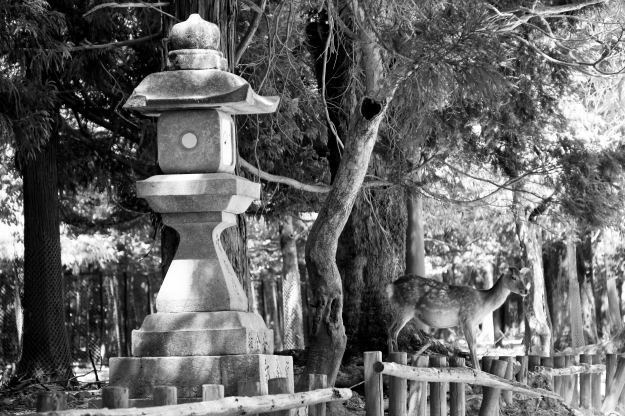 Spotting an exceptionally large crowd of Japanese school children headed towards Tōdai-ji temple, we hot-footed in that direction, managing to overtake and get our shoes off and into the Daibutsuden (Great Buddha hall) before the queue formed. And I’m really glad we did. Housing the world’s largest bronze statue of Buddha, and being itself the world’s largest wooden hall, it is a truly breathtaking sight. All the better for not having excitable thirteen-year-olds getting in the way.

It is said that the temple grew so powerful in the aftermath of its construction in the 8th century that the capital was moved from Nara to Nagaoka in order to lower its influence over government affairs. I can certainly understand why those people working in and around this building would have developed an overly-ripe sense of grandeur. Having gawped at the 15m high statue (and the two equally impressive Bodhisattvas that flank it) for a good long time, I then tried – and failed – to squeeze through a famous pillar with a hole the same size as the Daibutsu’s nostril. A must for any visitor: it’s said that those who can squeeze through the opening will be granted enlightenment in the next life…but it turns out only petite nine-year-olds deserve to be enlightened. 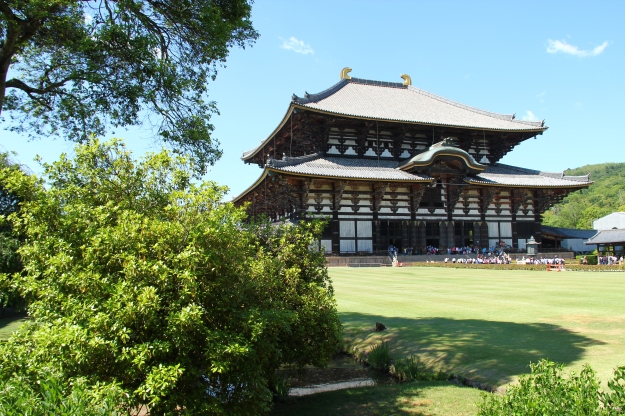 With tired legs, and eager to rest in our hotel’s public baths before a meal at Muraji*, we decided to leave it there (see, I do learn that it’s possible to have too much of a good thing) and navigated around the seemingly ever-hungry deer back to the station. I would definitely recommend squeezing Nara into your itinerary if possible – it’s a very easy trip from Kyoto and I imagine particularly stunning with autumn colours or at the height of cherry blossom season.

*one of the best bowls of ramen you’ll ever try – see my blog 29 Seasons of Tofu for more on our wonderful Japanese food odyssey.