Yes, it’s finally time I wrote about my favourite city in the world. The Big Apple. The Empire State. The City That Never Sleeps!  The place that’s so good they named it twice… 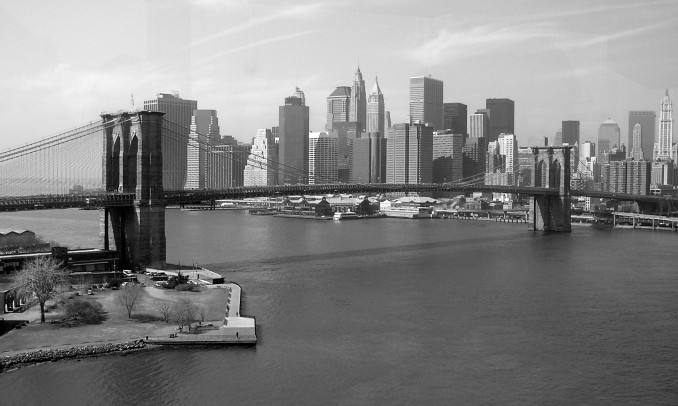 This is New York, the concrete jungle where – according to those great poets of our age – dreams are made. Well, I wholeheartedly agree with Mister Beyoncé. This is a city that takes hold of you from the moment you enter, craning in awe at the sublimely impressive skyline, and refuses to let go. And it lingers in the mind long after you’re back in low-rise suburbia. This is a city of contrasts – glitz and grit; light and dark; manicured and defaced; arrogant and humble; unknowable and intimate; incredibly big and yet, in many ways, incredibly small. This is a city where you can put down roots in distinct communities or can lose yourself in the bustle and energy of Manhattan. This is a city where you can immerse yourself completely in art and culture, haute cuisine and haute couture; experience stunning architecture and sights of great historical significance. Or you can sit with a beer (or blueberry lemonade, depending on your want) and people-watch contentedly for days on end. This is my home from home. Or, at least, it would be…if I had a spare half a million to buy a Brooklyn loft apartment.

Did I mention that I love it?

So, where to begin? At the start of October, I guess, which is when I embarked on my most recent trip across the Atlantic. This return to New York was a wonderful treat, initiated and financed by my (almost) mother-in-law, who turned 60 in July and who wanted to celebrate in style. Actually, it was a double-celebration, with my (almost) brother-in-law having turned 40 in the same year. When you have a combined age of 100, you deserve to make merry abroad!

So, after a seven-hour flight (don’t bother with Man of Steel, but do check out Alpha Papa), the five of us arrived in the Flatiron District and settled into our stunning apartment on Park Avenue, home of a nervous art dealer. Why nervous? Because Air BnB, the popular letting site we were using, had recently been getting a lot of publicity…what with it being illegal to sub-let in the state and all. This we learnt upon arrival, having not heard the fuss beforehand. Our host told us very clearly not to bring attention to ourselves or “hog the lift” (a pastime I reluctantly agreed to forgo)…but otherwise we proceeded to enjoy our stay without drama. If you’d like to sign an online petition against the state law, there are plenty to choose from!

The first morning saw three of our party embark on a helicopter ride over Manhattan: the aforementioned birthday girl’s belated present. Not having joined them myself, I can’t comment further, but all returned with big beams on their faces: job well done. Apparently the views of the skyscrapers, as you fly past Central Park, over the Hudson and up to Harlem are as spectacular as you’d imagine. Next, we enjoyed a sunny trip on the Staten Island ferry, skirting the Statue of Liberty (bigger than you think it’ll be) and snapping pictures of the soaring financial district behind us. This free excursion is a real must when you’re in the city and provides respite from the busy streets.

Having got our fill of the skyline (for now), and after an aborted attempt to push through the crowds, in what was now uncomfortable heat, to see the base of Freedom Tower (still surrounded by hoardings), we decided lunch was in order. Pizza, lobster rolls and burgers from South Street Seaport food market was just what we needed. It’s a great strip, in the midst of renovated warehouses, the old gangster haunts along the eastern waterfront. Plus, eating street food is so much cheaper than going indoors in New York! The afternoon then seemed to fly by, with short stops at St. Patrick’s cathedral and Grand Central Station being all we could manage to fit in. The latter is an incredible building – the largest commuter train terminal in the world, with a cavernous concourse, its famous meeting-point opal clock, Tiffany glass and astronomical ceiling.  No wonder it’s repeatedly voted one of the premier visitor destinations in the States.  I failed, unfortunately, to recreate the famous 1934 print, but could have stood looking at the light-strewn concourse for a long, long time. 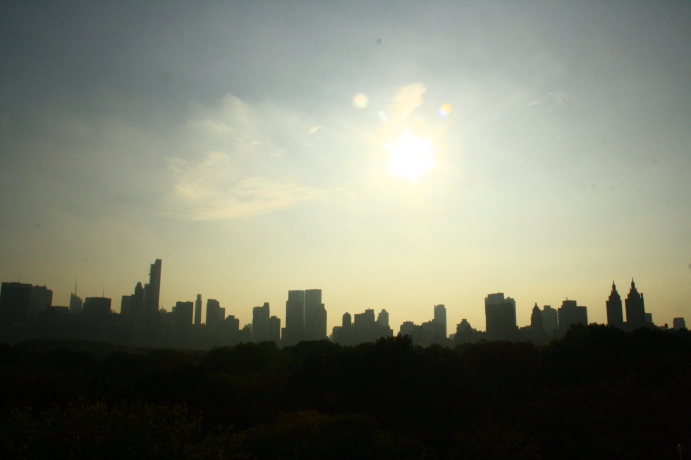 We ate at Little Owl in Greenwich Village that evening.  I’d heard great things about the restaurant and it’s consistently in the top five New York restaurants on TripAdvisor, so I was quite excited. It’s fair to say that not everyone was blown away by the food; it definitely depended on what you ordered. But the ambience and service made it a lovely experience nonetheless. And my food was delicious: their signature gravy sliders followed by whole seabass with lobster risotto. Yum, yum. Greenwich Village itself is a great place to go out on an evening, with lots of cool little bars, restaurants and jazz clubs. We ended up in one of the quintessential New York basement bars, the style of which has been appropriated by practically every new bar and restaurant to open in London in the last two years. Bare brick walls: tick. Shabby pendant lights: tick. Chipped, white metro tiles: tick. Lots of bequiffed 20-somethings drinking craft beer: tick.  Don’t get me wrong, I’m a sucker for it.  I’d happily always drink in such places…and in fact, as I describe it, I realise it’s pretty much how I plan to decorate our kitchen.

Day 2 saw our group go in different directions.  Paul and I headed into Williamsburg, having turned green with envy on hearing tales from our friends Jennifer and Fred’s recent stay in this hip Brooklyn borough. We completely fell in love with the area! If we moved to New York (it might happen…it might), we’d definitely live here. Cool cafes, vintage clothes shops, street art, record shops, bars…bars…bars… 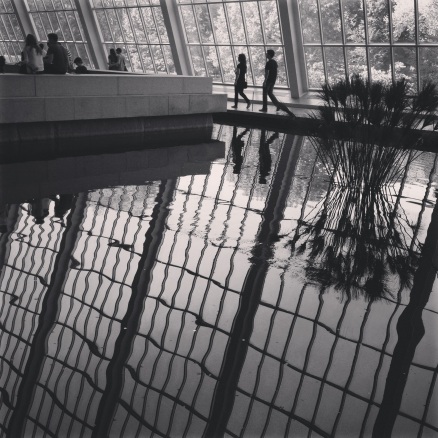 We spent ages walking around, buying odds and ends, then sought out the best murals, had lunch at the Smorgasburg food market at East River State Park (fried chicken and waffles) and a drink at a nearby bar (craft beer for him; blueberry lemonade for me). We could have spent days there. But, conscious of the long list of things still to fit in, and embracing the city of contrasts, we spend the remainder of the day at the Metropolitan Museum of Art…and its rooftop bar. The views across Central Park, as the sun was setting, were beautiful.  Aahh, it’s making me smile just thinking about it. We didn’t have time this trip to do Central Park properly, but I’ve walked through it previously – taking in the lake, statues, woodlands, Strawberry Fields and other points of interest – and it’s an amazing space. Next time…

After a couple of days of brilliant sunshine, the storm the forecasters had been threatening since our arrival finally came on day 3.  Undeterred – nothing can deter me from sight-seeing – we spent nearly the whole day at MoMA. My first time. Utterly fantastic! The American Modern exhibition was great and the permanent collection even more so. I had to be physically restrained from buying everything in the shop, but did manage to get away with a funky candlestick and a print of Andrew Wyeth’s Christina’s World. Sunday evening had been earmarked for the ‘fancy’ meal, so I’d booked us in to Colicchio & Sons in the Meatpacking District. Very nice it was too. Not white table cloth fancy, but definitely a treat and – again – the wine and service were exemplary. We all had the five-course tasting menu: canapés and fino, salmon, little neck clams with bucatini, beef short ribs, and peanut butter and caramelised banana torte for me. I felt decidedly stuffed afterwards!

We were back in the Meatpacking District early the next day for Chelsea Market and the Highline: a walk along a disused railway track, pimped up and planted with shrubs. It had turned grey and cool, so we didn’t see it at its best, but I’d say it’s definitely worth spending a couple of hours on. Paul and I then jumped on the subway to have a walk around the Lower East Side, with its old tenement buildings and street art, before re-joining the gang at the Rockefeller Centre for the ‘Top of the Rock’ experience. 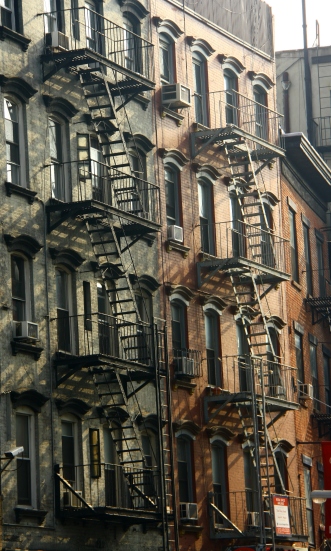 The art deco GE Building at the centre of the Rockefeller plaza is 850 feet (70 stories) tall and yet – in a city with close to 6,000 high-rise buildings, 97 of which are over 600ft – is only the 13th tallest in New York. If you want properly tall, try the Trump Tower (927ft), Chrysler (1,046ft), Empire State (1,250ft)…or the daddy: Freedom Tower at a whopping 1,776ft (104 stories).  Freedom (or, to give it its official name: One World Trade Centre) is the tallest building in the US and the 4th tallest in the world. Wowser! Anyway, back to Rockefeller, where – despite its comparatively diminutive size – you can enjoy views from its observation deck that are probably the best urban landscapes you’re ever likely to see. As you circumnavigate the roof, you can pretty much see the whole of Manhattan, with Central Park stretching out in front of you to the north and the looming Empire State Building dominating the skyline to the south. You can even see the Statue of Liberty, way in the distance.  Having been up GE on a previous visit, it was actually more impressive to see with menacing storm clouds gathering, turning the sky slowly blacker and blacker. All you’d have needed was a bat symbol and you’d have been in Gotham. The presence of lightning rods atop every building does, however, sober the mind, so I believe we were wise to hotfoot it down before testing our luck.

Turns out we’d saved the best ‘til last in terms of our gastronomic choices. The food at David Chang’s Momofuku Ssäm Bar on 2nd Avenue was truly exceptional. I’d been desperately keen to go there after seeing the Korean-American chef on Treme (by far my favourite current TV show) and thinking his food looked delicious. I wasn’t wrong. Our starters of apple kimchi, soft shell crab and raw mackerel were very tasty, but it was the rotisserie duck centrepiece that stole the show: stuffed with sausage meat under the skin then roasted on a spit, with confit legs and sides of homemade chive pancakes, ssäm sauce, bibb lettuce and mint. Seriously, one of the nicest meals I’ve ever had. I know I’ve probably said that a few times in relation to great food in far-flung places, but you’ve gotta believe me on this one: I can’t recommend it enough.

So, that was the end of our short – but very sweet – stay in NYC.  But not the end of our holiday…The next day saw us eating leftover duck on the train from Penn Station to Boston, Massachusetts, where we were to start our New England journey with my dad. I’ll tell you about that another day… 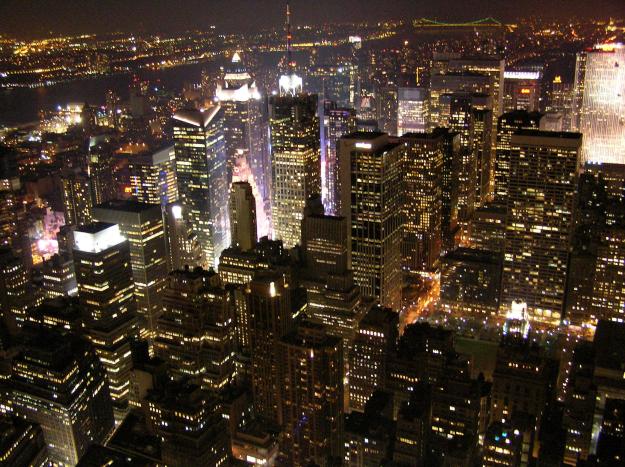 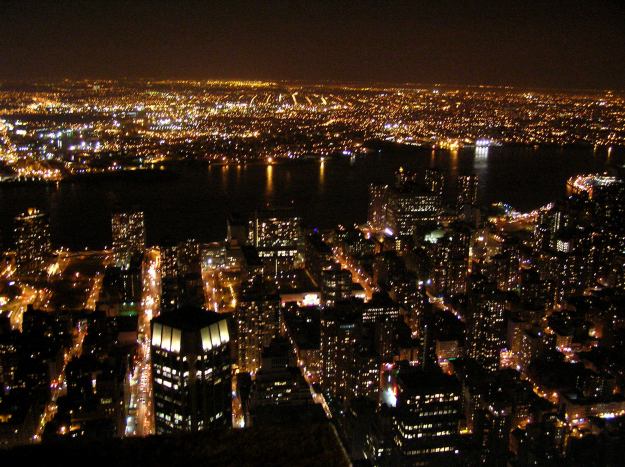 1 thought on “So Good They Named It Twice”